As we are just beginning our third week of the quarter, a relevant topic to address with all the new bruins around is the dreaded “Freshman 15”. Is this weight gain something to be concerned about or is it just a myth?

According to an article by Hovell and colleagues entitled, “Risk of Excess Weight Gain in University Women: A Three-Year Community Controlled Analysis”, researchers compared a group of freshmen women living on campus to a group of freshmen women living in the community. Results of the study found that the freshmen living on campus were almost three times as likely as the women living in the community to gain weight; however, by their junior year, the women who initially lived on campus were almost back to their baseline weight. This return to their original weight was attributed to moving away from the buffet-style food and going back to a more regulated eating pattern.

In another instance, a researcher named Cecelia Brown found through examining peer-reviewed journals, magazines, and newspapers that half of the popular press state that freshmen gain 15 pounds. In actuality, the 14 studies in the peer-reviewed journals revealed that the average weight gain in freshmen was less than 5 pounds. The press seemed to make out that the weight gain was much higher than in reality and constantly reinforced the fear of the “Freshman 15”.

All in all, it is definitely easy to be tempted with all of the dining hall food and the new freedom that comes with living away from home. However, the fear of gaining weight itself and the term “Freshman 15” can cause a lot of harm through the self-fulfilling prophecy. The bottom line is to make smart choices and not get too preoccupied with gaining weight. Get out there…enjoy the sights of Los Angeles and stay active. The “Freshman 15” will soon be a thing of the past! 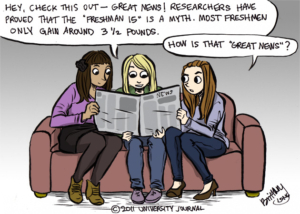 Another Day, Another Paper!Bernice RA Blogs: Weight stigma does not reduce obesity
Scroll to top